Planning is going ahead and the next thing I thought to tackle would be LDEs (Layout Design Elements) and where could they be located on the layout, focusing on the 1st Deck at this time.

After reading about Mark Lestico’s Cascade Sub on LDSIG Wiki, I found an interesting and new (to me) tidbit in there about determining how many LDEs would fit along the main line.

The formula, as applicable to N scale is:

Your train length is predetermined in your Givens and Druthers, and is an arbitrary train length you wish to run on your layout. People just love long long trains, but when your train is leaving one town and entering another at the same time, that is unrealistic. Mark’s formula and rationale makes sense to me so I used it as a starting point.

I opted for 7 ft. long trains on the Newbridge & Lockport RR, although I could’ve gone with longer trains, I wanted to have enough separation between my LDEs so that trains are actually journeying across the layout.

Applying the formula from above, I come to a 16 ft. number – actually I cheated and went with 15 ft., forfeiting the 1 ft clearance track portion.

In the first design I made, LDEs are sequentially placed irrespective of the benchwork or their location:

Next, after some comments on the nScale.net forum, I revised it to this so that the LDEs end with the backdrop and the tip of the peninsula is used as a transition: 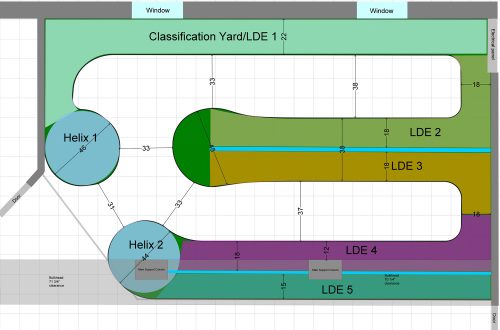 This is still work in progress and will most likely changed, as I was told that I need to come up with a theme for my layout before proper transitions could be determined between the LDEs.