I spent the day contemplating whether all 3 decks need to be built on the peninsula all at once or not, but more on that another time…A more immediate snag came up where some of the fixtures are in the way, while other accessory items need to be redone altogether. That’s what happens when you are building a railroad in a finished basement… 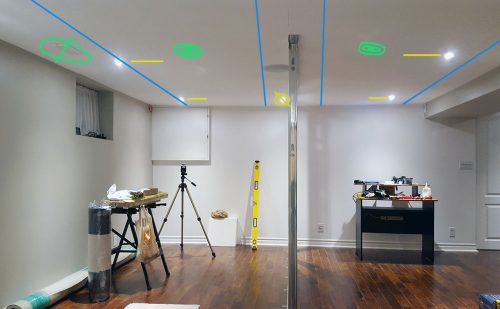 The blue lines in the photo above approximately show where the valance should go and those recessed lights to the left are right in the same line, and I mean 22″ from the left wall, exactly on center. So they need to be moved to the right and into the aisle way, if I ever want to have some illumination there. I don’t doubt that the light will come from the deck illumination but that would point inside not outside. The lights on the right might not need to be moved but I’m figuring they should be centered to the aisleway as well so everything looks neat.

The speaker will end up inside the valance which is not a big deal, and it has to stay there anyway, I am not moving it!

A much bigger issue is the HVAC register circled and crossed in the green to the left. It is inside the valance and is the ONLY register in the room for heating and cooling. NOT GOOD. Originally, I thought I could make a 2-3″ sliver in the valance up at the ceiling, route the air through it from the register via a shallow make-shift duct, and into the aisle. Except that might be a quasi solution affecting the overall ambience in the room with conditioned air never reaching other areas at all.

More permanent, and better solution in my opinion, would be to close that register off and install two round air diffusers, symbolized by the green circles in the aisles to the left and the right of the peninsula wall.
Of course it’s a major undertaking: open the ceiling in two/three spots (optionally remove the register), cut the supply duct in two places (oh joy, 12″ joist space), install the tees, connect the round diffusers, put the drywall back, tape it and paint it. Yet, I fear if I don’t do this now, it would be twice as hard later on when the benchwork is up and space is tighter.