Despite having to shovel some wet and heavy snow midday, it was a very productive day on the layout. I’m pleased to announce that peninsula benchwork is done. 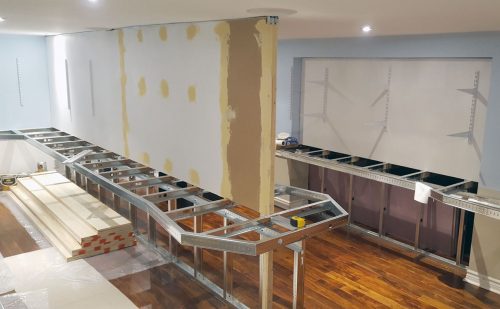 I might need to add some cross braces here and there, but I’ll revisit that later, if needed. For now, what’s left to do on the peninsula is to sand and prime the new backdrop surfaces, then install the uprights. 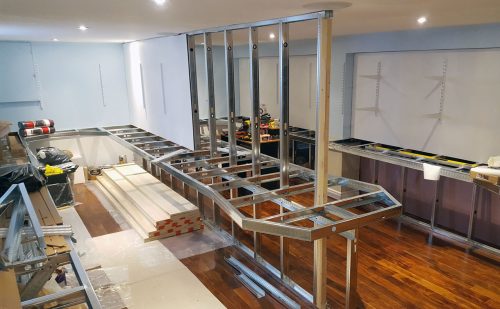 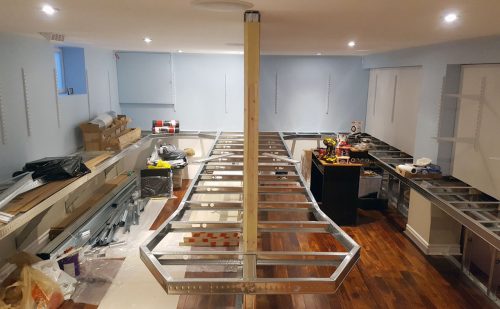 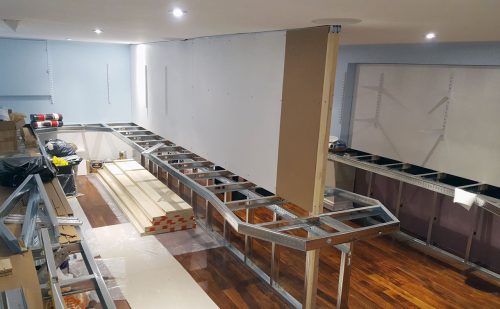 Instead of using the normal mud compound for spackling, this time I used the wood filler. I wanted to see whether it makes a difference on the seams. It does dry faster but I notice I have to go back over the screw head because it leaves a dimple there that needs to be re-filled.

Once that’s done, I’ll lightly sand and prime the affected areas, probably in the next couple of days. Then install the remaining uprights, having in mind not to place them too high as I might want to dip the middle or upper level below the default height.

Meanwhile I still need to install the electrical wiring for the outlets below the benchwork and also consider how/what will power the layout illumination. Ideally, I would like to be able to turn the power on using a single switch if possible, or perhaps two (a separate switch for the staging/Lockport area).

I’m thinking to only have 3 main power districts, one for the helix, one for the staging/Lockport, and one for the main layout. Then I would divide the districts into zones (lower/middle/upper level) each with their own circuit breaker. As I do not have the track plan finalized, I have no idea where I would need the auto reversers deployed, so that’s on the back burner for now.

Right now track plan wise, I’m putting more focus on the staging areas and whether to leave them stub-ended, or try to figure out a way how to automatically restage the trains, in which case I might need those above-mentioned auto reversers…