It’s been over a week without an update on the layout. I spent the time to rest and reflect on the progress so far. Looking at what’s next, I still do not have a concrete idea of what kind of a helix to build or a finished plan for the lower level.
Today I went to the LHS and ended up getting “a few” buildings to help me contemplate about the industries to add to the layout. 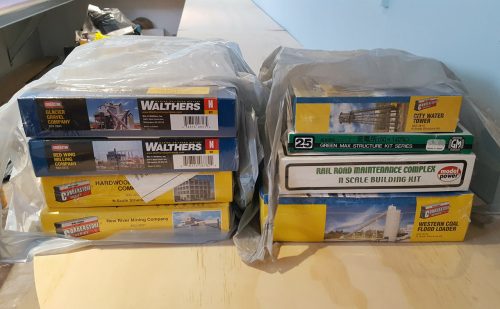 I found the kit below in the pile on the shelf, and had to have it. Newbridge and Lockport RR will now have a “nucular” power plant. Sure, it might throw it out of the context for the 60s, but would be good enough for the 70s era. 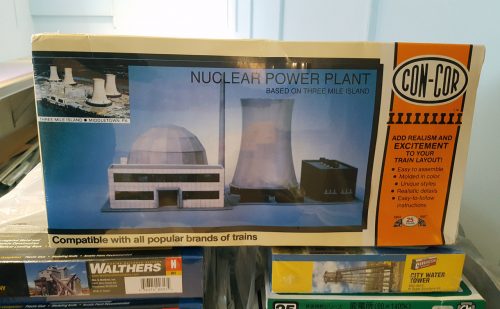 I like the irony of the whole thing though: “Add realism and excitement to your train layout!”, and the best line: “Based on Three Mile Island.”. For those who don’t know about the Three Mile Island accident, look it up. Oh, and that’s how we got “The China Syndrome” associated to it, too. :-)

Otherwise, have also been mulling about extending the benchwork at a few places, namely in the yard area and on the Lockport side. I’m just not sure whether those few inches are worth the effort, as well as taking away the space from the aisle.

I also bought bunch of E26 sockets (on sale, 28 for $12) for standard A19 medium light bulbs. My thinking is to use standard (LED) bulbs instead of LED strips to light the layout. It would end up costing much less and I can still get a nice neutral white 4000K CRI 90+ quality bulbs at a fraction of a cost of a comparable LED strip.

Got bunch of things to do on the layout next: the pending task of electrical wiring; need to secure the top plywood surfaces to the metal benchwork and re-cut a few replacement ones while at it because the plywood is warped in couple of spots (#$&%@!); order track and materials for the helix; start laying track for the lower staging and run buss wires, etc…