I’ve been struggling to figure out what to do about getting to and from upper levels. That is why the section in the upper left corner of the plan (that nobody ever sees in the photos) is still undeveloped. Originally in my N Scale plan there was supposed to be a helix there, but now with H0 that helix is a bit bigger and that tipped off the scale for me, even though N scale helix was almost as big, square footage wise.

The helix for H0 is going to be a really modest one, barely adequate by any standard. A 24″ inner loop and 26.5″ outer, with an average grade of 2.3%. I wish that grade was 2% or less but there’s just no room to make it an oval or make it a bigger circle without sacrificing aisle and benchwork space. I might see if there’s some room for a triangle but knowing that I need a 24″ turn curve that might be out of question.

Another option is a gradual around the wall climb, a no-lix. Problem with that is I would either have to give up the walk-in aspect of the layout and put a swing gate at the entrance, or make trains turn back and go through the same scenery twice, on a different track. Either methods use more precious benchwork space all around the layout, unlike the helix which hogs the corner with its 20 sq. ft.

Having said all that, I decided to keep the helix in for now, and work out the remaining LDEs on the middle and the upper level. All of this stemmed really from my question over on the Model Railroad Hobbyist Magazine forums regarding putting classification yards right next to the staging.

In my original plan the lower staging was on the outside of the layout behind the columns: 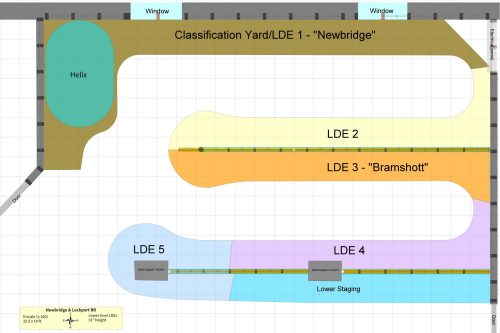 I planned to put the upper staging above in the same area. The Lockport branch with the seaport scene would be sandwiched in-between the two staging levels. That kind of worked for N Scale because 12″-16″ spacing between decks is quite generous and I was going to give Lockport a bit more height at the expense of the two staging decks.

Moving onto H0, all of that changed and 12″-16″ spacing between the decks does not seem like much at all. Plus the staging levels would’ve been stub-ended precluding any possibility of auto-restaging. The most I could do is to put a 90′ turntable in the (lower right) corner and let locomotives turn around and escape their dead-end. 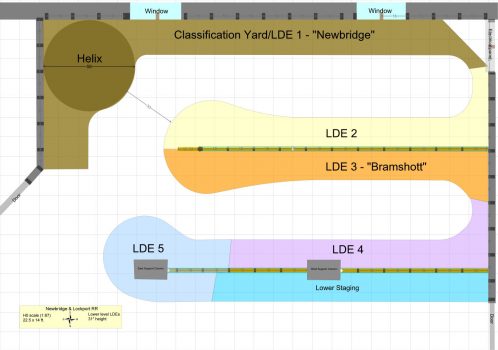 So, I embarked to see whether there’s something else that could be done and from some of the replies in the above mentioned forum thread, I came up with an alternative design for the lower level: 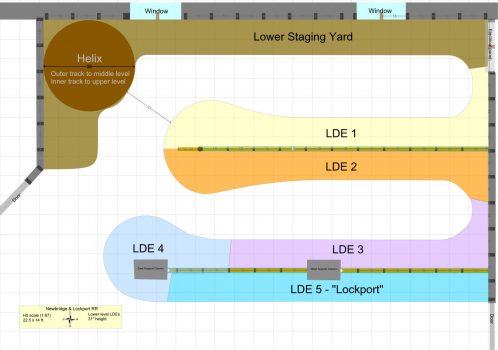 The staging has been moved to the longest wall, and the entire lower level dedicated to the Lockport branch line. Lockport will still be where it was planned but it won’t be sandwiched between two decks. The middle deck then is going to be the primary/main deck of the railroad. 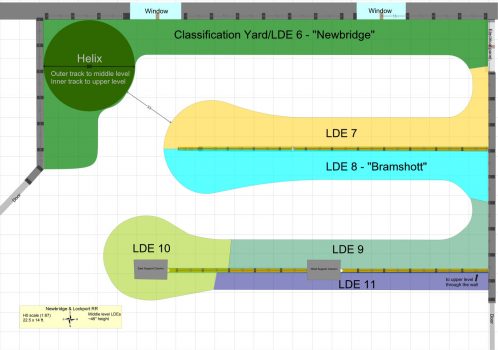 It will host the main classification yard, and also the two populated areas: Newbridge and Bramshott. LDE 9-11 are envisioned to be ascending areas, where trains would be gaining elevation, coming to the lower right corner / end of LDE 11, where they would go through the wall and onto the next, upper level shelf. How much elevation is still to be determined and so is the shelf depth on the outside portion (above Lockport) as well. 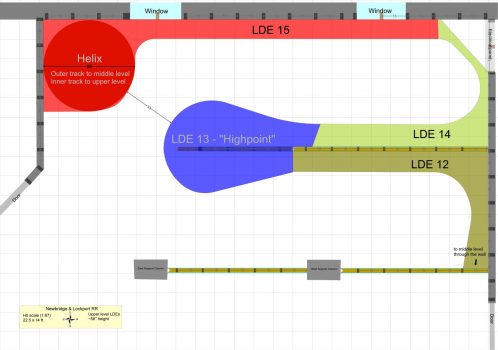 Upper deck has one populated area, Highpoint, although none of these are set in stone at the moment and their number and arrangement could change.

The operating scheme is basically this: lower level is reserved for staging and the Lockport branchline, leading down to the coast (and the seaport). Obviously trains will bypass staging on their way to Lockport from the middle level classification yard, and no trains will go directly to Lockport from staging.

Trains would leave the staging and proceed to the helix, climbing to the middle level. I am on the fence whether the trains should stop at the classification yard or not. It would make for a really short run if done by an operator.

One option is to have the Yard Master bring trains into the classification yard and out into the staging. The other option is to have an interchange yard or two somewhere else on the main level where foreign railroads would drop-off / pick-up cars. This would create an interesting operating schema with many job opportunities, while making it plausible to exist (big railroads didn’t get trackage rights to the Newbridge yard) so they go to their own interchange yards, while the classification yard would have job(s) to send a loco to the interchange(s) for drop-off / pick-up, come back; next job would be to block the new cars and assemble a local; another job would send the local off to industries on the layout for drop-off / pick-up, etc.

Upper level is narrower and starts in the lower right corner. A drawback is that the operator needs to go back inside the main space once they reach LDE 11. Although, they could just follow the train half way to LDE 10 (tip of the tear) and then proceed back to the end of that aisle waiting for their train at LDE 12.

LDE 14 has a lift-out bridge which is necessary to access the electrical panel in the upper right corner. I’m not sure whether LDE 15 should have anything industrial since it’s above the classification yard and might create congestion in that area, so still to be seen. After that back to the helix and down to the staging.

Trains can actually ascend from the staging and go the other way, helix, LDE 15 and backward route. This way I don’t need to build two stub staging yards and could potentially have continuous running through the entire layout, if desired. Also, there is room to auto-restage trains on the lower level via some hidden loop.

That’s about it, I have some other ideas, but more on that later.