After getting some feedback on the forums, I had to decide how to correct issues that have been plaguing the layout from the start. As the layout shape is an E and there’s only one helix, the lower right corner next to the door there becomes a dead-end for all 3 decks. Ideally, if there was another helix at the end of the other arm of the E, this would not be an issue, but I did not want to put a helix around the column, so…

First I made a compromise on the lower deck, turning it back into staging instead of a fully scenicked and operating level, as it was in the N scale plan. A major change is an addition of an incline/decline in the LDE 0, which is the only scenicked portion on the lower deck and the beginning of the run.

The purpose of the incline is to substitute a helix and allow trains to ascend/descend from staging into LDE 4 (Shorncliffe). In the process of altering LDEs I also gave them names so the layout plan can feel more realistic. 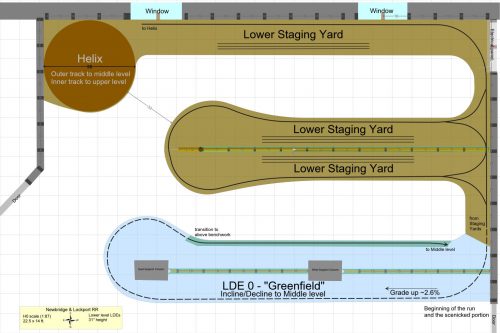 This incline runs mostly under the benchwork and surfaces at the beginning of the lobe, on the inside edge, as seen above. It continues to climb up and merges with the benchwork of the middle deck at the Lockport Junction off to the right.

The lower deck Staging has a number of yards interconnected so that trains can re-stage themselves. Hopefully I’ll be able to pull all this with 22″ radius curves because that’s the best I can fit in the space at the root of the peninsula. The main Staging yard on the South wall is larger so it is not a big issue there, only a matter of choosing a track arrangement. 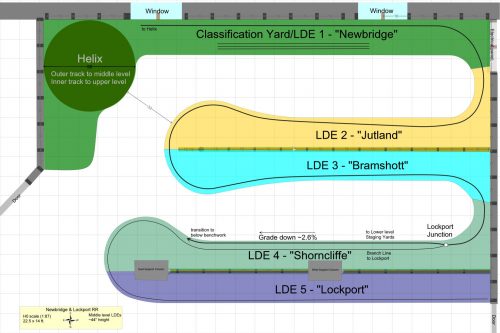 Middle deck retains the Classification yard in Newbridge (LDE 1) on the South wall, next to the helix, which will serve both operating decks (middle and upper). Shorncliffe (LDE 4) has a junction point where main splits towards Lockport branch line that passes through Shorncliffe and around the column into Lockport (LDE 5). There is obviously potential for more industries in Shorncliffe, between the columns and also on the inner side of the lobe.

Newbridge yard currently starts half-way along the West wall, after Jutland. On the other side, on the East wall, just below the helix is a pocket where initially I planned to put a turntable and a roundhouse that would connect to the yard above. I’m now considering shortening Jutland (LDE 2) on the right side in favour of placing the turntable/roundhouse in that corner there and extending Newbridge above, but that’s yet to be determined if it can fit and makes sense.

Lockport itself will be the only deck on the outside of the columns, aside from the Greenfield (LDE 0) incline below it, which means that there is no depth and height limit for scenes (within reason). After all it’s supposed to be a dock/pier/port scene and will be served by a local from the Newbridge yard.

Once trains leave Newbridge yard, they will head up the helix to the upper deck. 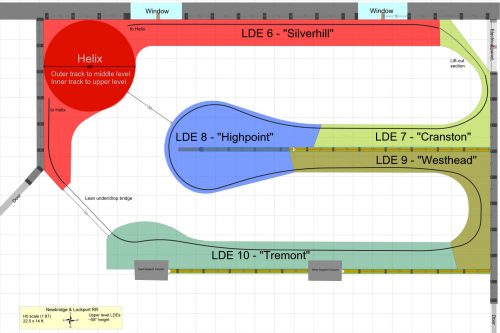 The change here (another compromise) is that they will now head towards Tremont (LDE 10) via a drop-bridge (or a lean/duck under). This maintains the “true-ness” of the layout, so trains are not reversing direction like they used to in the original plan. A walk-in aspect of the layout is being lost through this, but there are no dead-ends to contend with and trains will not reverse directions or go through the same scene twice.

Upper deck also has a few places for industries and/or scenicked portions. It also includes a lift-out section in Cranston (LDE 7) to allow access to the Electrical Cabinet. Once the trains pass Silverhill, they head down the helix and into the Staging.

The opposite way is also possible now – trains climbing from Staging and going through Silverhill, etc, heading backwards towards Newbridge and descending thorough Shorncliffe and Greenfield into the other side of Staging.

I’ve started contemplating a helix design and it seems that a counter-clockwise direction is most favourable. I wish to use the space on top of the helix for something, perhaps an industry of some kind, so the track arrangement needs to be engineered around that.

Also, I think there’s no reason that trains must stick to inner or outer track when making their way through the layout. I will add crossovers inside the helix so that ascending trains will always be able to take the outer track, while descending trains the inner track. This way the effects of the higher grade (~2.6% on the inner, ~2.4% on the outer track) could be lessened.