Yesterday I went and got some 24″x36″ cork sheets for the entire staging deck and thought I would be spending the weekend laying them down, but other things came up…Sometime ago I realized I should’ve kept the lower deck open on the peninsula – there’s really no good reason to have a backdrop there. So, before securing the top surface on the peninsula, I decided to remove a 8″ tall strip of backdrop hardboard, up to the uprights. 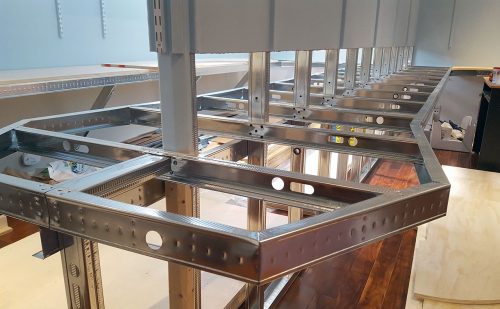 Turns out it wasn’t as big of an ordeal as I thought it would be, never the less it still took 1,5 hrs to score the hardboard all around with a knife, remove all the screws, then break it all up. Of course, then it dawned on me that the gap between the studs needs to be filled in case trains roll over.

Instead of putting plywood in-between and trying to devise some mounting method for it I opted to add a narrow strip back to the area, just tall enough to prevent trains from falling through. And, I lucked out that I had couple of hardboard strips pre-cut, in a usable height. Two steps back, one step forward… 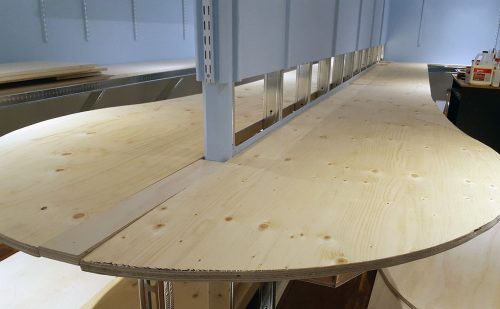 I was going to leave it as is, but then I looked all around and saw blue colour everywhere and ended up painting the new strips blue, to fit. Nobody will see them there anyway, unless one takes photos in the staging, but it only took a few moments to apply a single coat of paint.

It looks ok, though what bugs me more is the plywood surface not being flat (you can see how the edge dips down). Thank you Home Despot for selling shite products at extortion prices, and for pushing all small lumber yards out of the city, assholes.