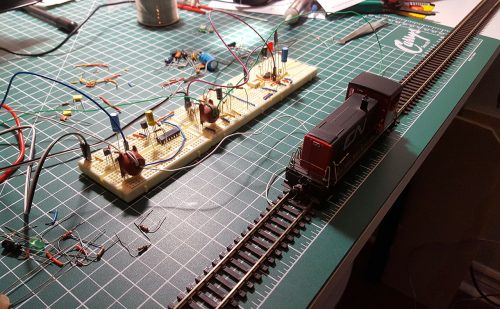 After a lot of going back and forth, the detection of both is similar because the input stages are about the same, while the accuracy is probably slightly better on the LM555 because it does hardware “debouncing” and adds a 1 sec delay for track clearing. Similar effect is achieved on the transistor circuit if the capacitor in the output stage (100nF) is replaced with a higher one, such as 1uF or more. Technically it adds a similar delay to 555 circuit, since the capacitor charge/discharge time becomes higher.

All of this is connected to my DCC++ setup with an Arudino Uno and a Motor Shield. This is hooked up via Raspberry Pi 3B+ to JMRI and it all looks like this: 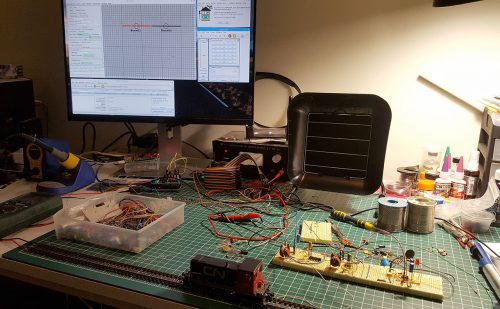 Hard to see in the dark, but the left red track on the screen (block01) is where the locomotive sits currently, as can be seen in the photo.

Really, either circuits would work and it only depends on time and money spent to build them, being resource efficient and all. I’m still not sure which way I’ll go as I have a few more ideas to try first, one using opto-couplers. More about that later.