I knew I needed a way to cut 80+ spacers for the upper helix loops, and I definitely did not want to use a simple blade knife. All of these spacers need to be exactly the same length (height) in order the maintain the grade across the entire helix so some amount of precision is needed. Thus I spent the day fabricating my own chopper block. I ended up buying a PEX/Tubing cutter blade and then finding a way to mount it on a sturdy handle that won’t deform from pressure. 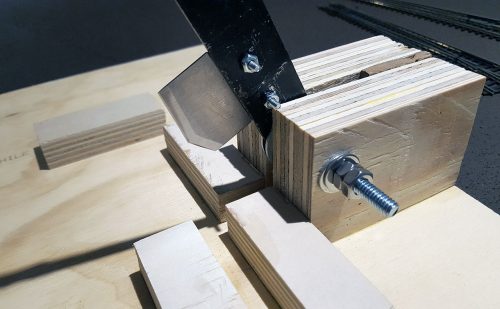 There was a bit of McGuyering to fit things and figuring out how exactly the blade needs to mount (the attack angle and first contact point) so the cut is relatively straight and consistent, without warping of the whole contraption and excessive pressure.

The local HD had the actual hand tool this blade fits into for cutting PEX/Tubing, and I thought at first I should buy the tool and rig it somehow onto a surface, but I dropped that idea quickly because it was $30+ for the tool (the blade alone is $13). And, I wasn’t sure how to squeeze the tool while mounted on the surface and maintain consistent spacing between cuts.

While I was building the jig, Canada Post showed up (on Sunday even) and delivered a parcel from Tam Valley Depot. yay! Some goodies for controlling turnouts in and around the helix: 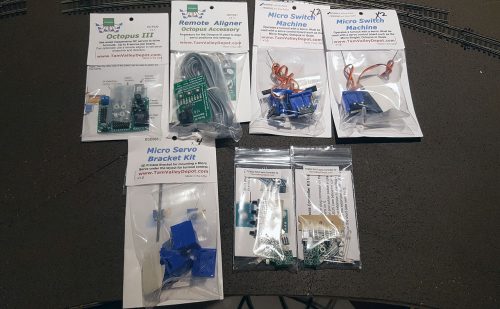 Back to the chopper board…after putting everything together and letting the glue settle, I secured all wood pieces with some screws from underneath. 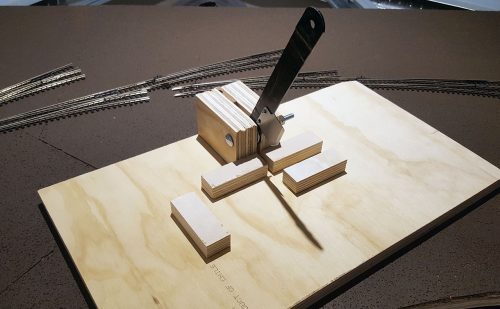 The metal handle that holds the blade was not perfectly straight and as a consequence the blade did not sit flush, so the cuts were slightly slanted. I ended up hammering the metal handle a few times here and there and now the cuts appear better. Who says that a (big) hammer does not solve problems. :)