After a bit of a break, which was spent mostly shoveling ungodly amounts of snow and ice, it’s official. First feeders have been installed on the railroad. 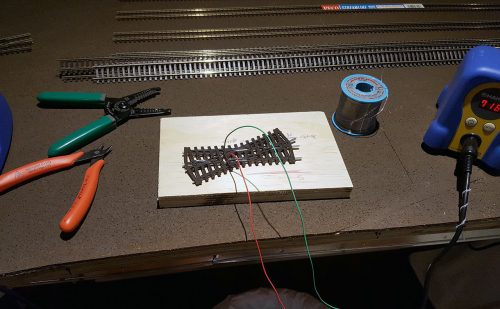 That lowly crossing is part of the helix on-ramp junction leading into the staging.

I’m using a Red/Green colour scheme for the feeders (Red for the closer, south rail, and Green for farther, north rail). Farther rail will also be the one that gets interrupted and isolated into blocks. Green colour wire will interchange with Blue wire when wiring sub-bus and power districts to circuit breakers, etc. Main bus remains Red/Green since that’s the wire I already bought (2 pair 12 AWG stranded speaker cable Red/Green/Black/White). 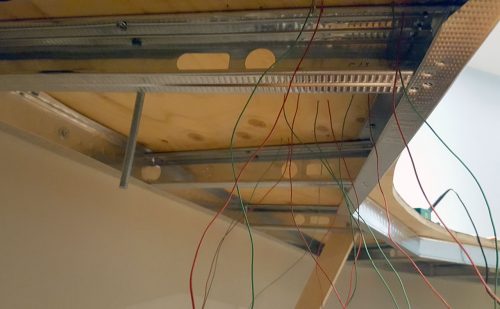 I’ve been debating whether to add feeders from every piece of rail in that junction, and at the end decided to do so. With all the automation I’d like to do, it made sense that every piece of track is detected, including those two short bits above and below the crossing. Obviously all turnouts will be detectable and all stretches of rail between the turnouts will be blocked leading into and around the staging yard.

Speaking of the staging yard, I ended up altering the plan I was originally going with that had two double-ended yards. Instead, those were merged into one long double-ended yard, also doubling the potential train lengths (not like I would actually run 20 ft. trains – the layout is not that big and it would feel wrong). Trains will be staged in a sequence, one after another. The other two stub-ended yards remain and, I’m also left with a bunch of brand new PECO large turnouts, meh. 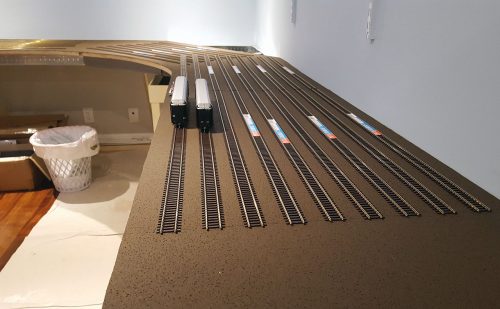 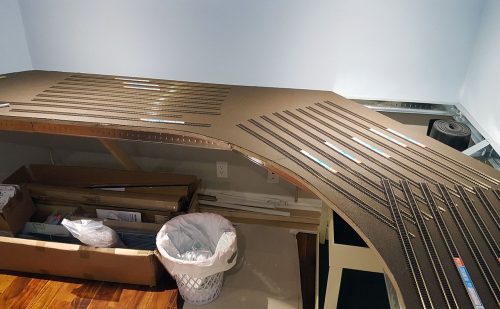 Before we wrap this update, I want to point out how shitty Atlas insulating rail joiners are. Actually PECO ones aren’t any better either. Both are steaming piles of plastic turd. 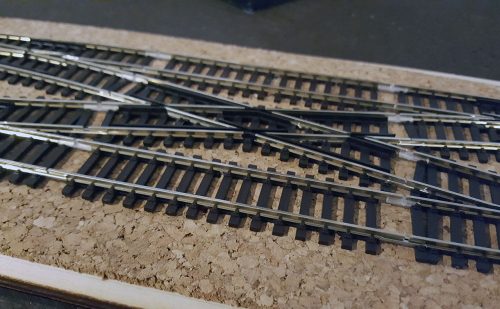 I do not understand why don’t they make them so that the notch in the middle reaches the top of the rail. Instead I’m left with gaps I need to fill with CA glue, and on top of that the joiners create additional spacing between the rails that needs to be accounted for in advance. I had holes for Tortoise motors pre-drilled and pre-fit so when I went to add insulating joiners nothing matched anymore, so I had to shorten the crossing and those short pieces of track to fit everything again. And the insulators introduced gaps in the other rail as well. GAH!

Yes, someone will point out that I should’ve put metal joiners on both rails, then cut one rail with a cut-off disc, and fill the gap with a piece of polystyrene and CA glue. That seemed to me like a lot more work and I wanted to finally get going on this project so I opted for an existing solution thinking it should be fine (not to mention I bought lots of insulating joiners).