My current plan for building the middle and upper level is to use twin track shelving system that many modellers have used before to build their layouts. I opted for it since it offers some flexibility in adjusting the benchwork height (at ~1.25″ increments). I knew I had to figure out some way around the peninsula, so today I decided to build a custom stud that would hold the shelving standards and allow curving around. 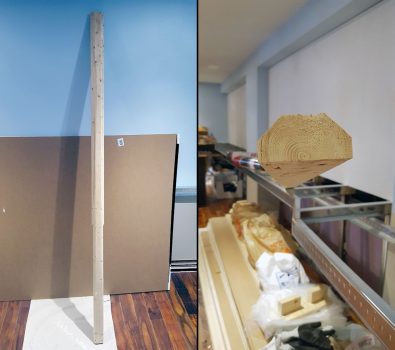 I ended up using an old 2×4 (I did not have many on-hand, and most of them were twisting) that I first trim as straight as I could, chopping off curved edges. After that came some 45º cuts which turned out OK but then I realized I should flush the width of the stud with the hardboard backdrop that’s going on the peninsula wall. So, narrow the new stud by another 1/8″ on each side and voila. 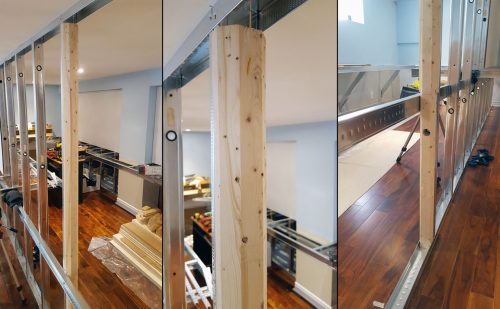 On a side note, I filled a plastic grocery bag with wood dust (I did cutting in the driveway and always clean-up afterwards).

This is going out to Bosch, Dewalt, and other common-found tool makers – your portable/job site table-saws SUCK. I own a Bosch, but the same can be said for any other manufacturer. The amount of wood dust it made for a dozen cuts I did was atrocious.

The non-existent dust collection system consists of filling up the cavity beneath and around the blade, including every nook and cranny (because someone thought it would be cool to have so many small pockets of nothingness inside). I would think that there are some smart people designing for these companies, but they seem to prove me wrong every time I use one of their tools.

I also own a Bosch 12″ Mitre saw, and its dust collection system is an afterthought as well. I bought Bosch because its arm collapses and fits into tight spaces, as opposed to the Dewalt one that glides and takes more space front to back.

One day when I win lottery, I’ll buy Festools’ and SawStops’ of the world, and (hopefully) get a decently engineered tool. But then again, I’ll just pay someone to build me a layout if I had that much money. Maybe mpeterll from YouTube, who’s been building a layout for Intel’s CEO past few months, would come over to Canada…he does very nice work.