During the week I squeezed in some time to prime the hardboard (two coats) for the backdrops, looking towards the weekend for their installation. Well, the plan worked out and the backdrop surfaces have now been installed. 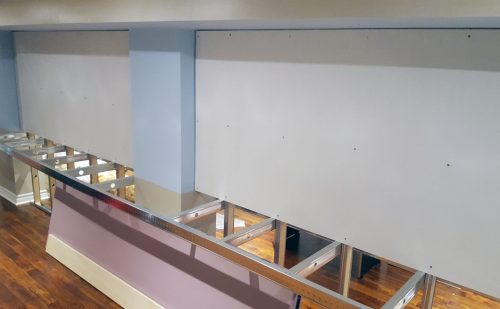 It seemed it would all go fast, but nothing is ever the way it seems. Had to add some short metal stud pieces on the sides next to the columns and the wall to support the surface and prevent it from warping in that area. Also, I wasn’t sure where to drill holes to secure the hardboards to the studs so had to buy a 24″ double-track standard (upright) for the shelving and see where its holes are located so they don’t overlap. 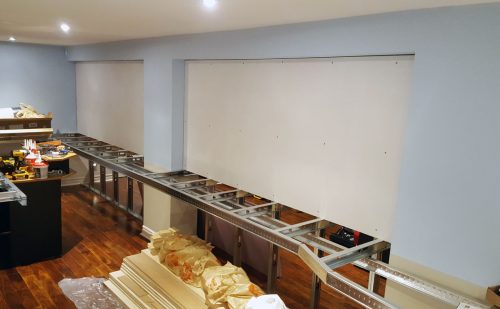 Next I will lightly spackle the areas over the screws and sand and prime it. Following that, the peninsula surfaces need to be primed although I can only do half of the peninsula as the tear/end portion is still not complete, pending finalizing the plan (which also depends on the type of a helix being used). Overall, I’m glad it’s not finished as it gives me some room to work in that space.

Have also been thinking to dump the 3/4 plywood boards I already have pre-cut for the lower level in favour of something thinner and lighter. Maybe a 1/4″-1/2″ exterior grade plywood with 1″ foam on top. I’m really trying to avoid overbuilding the layout, and many people do using 2x4s and 3/4″ plywood, especially in N scale, simply because that’s how it’s always been done in the old days. And old habits die hard…